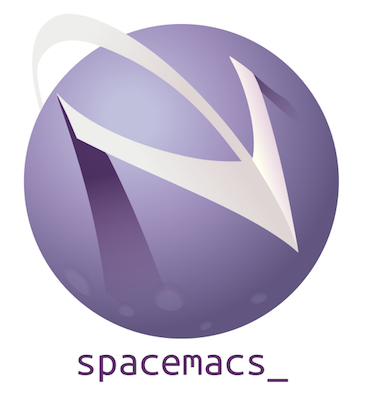 This assumes you don't have an existing Emacs setup and want to run Spacemacs as your config. If you do have one, look at the full installation instructions for other options.

Spacemacs is a new way of experiencing Emacs -- it's a sophisticated and polished set-up, focused on ergonomics, mnemonics and consistency.

Just clone and launch it, then press the space bar to explore the interactive list of carefully-chosen key bindings. You can also press the home buffer's [?] button for some great first key bindings to try.

Spacemacs can be used naturally by both Emacs and Vim users -- you can even mix the two editing styles. Being able to quickly switch between input styles, makes Spacemacs a great tool for pair-programming.

Spacemacs is currently in beta, and any contributions are very welcome. 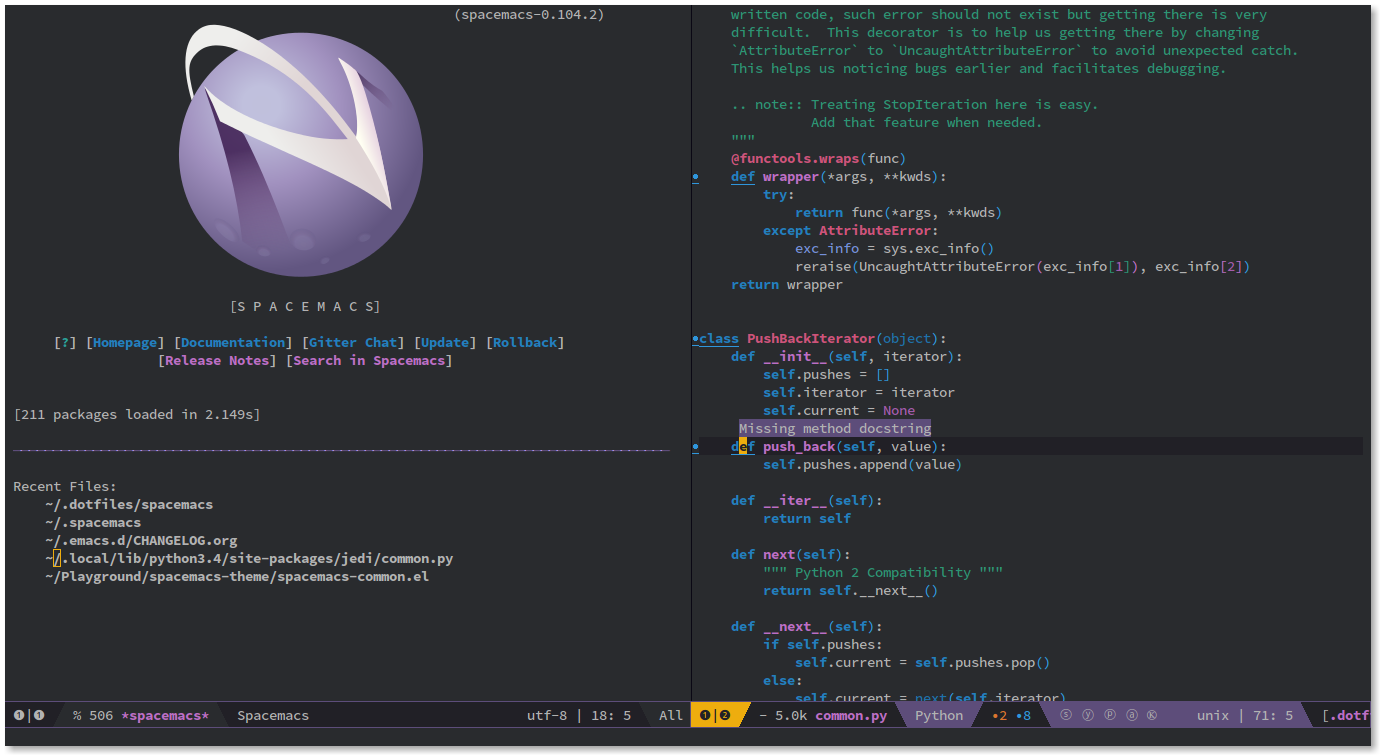 Comprehensive documentation is available for each layer by pressing SPC h SPC.

You can also check the general documentation, quick start guide and the FAQ.

If you need help, ask your question in the Gitter Chat and a member of the community will help you out.

If you prefer IRC, connect to the Gitter Chat IRC server and join the #syl20bnr/spacemacs channel.

Last but not least there are a lot of high class tutorials available on YouTube:

Spacemacs is an extension of a popular text editor called Emacs. Thus you need to first install base Emacs and then download the Spacemacs extension files with Git.

Spacemacs requires Emacs 25.1 or above. The development version of Emacs is not officially supported, but it should nevertheless be expected to work.

Some modes require third-party tools that you'll have to install via your favorite package manager.

Install the emacs package with your linux distributions package manager.

Do not install the xemacs package. It's not supported by Spacemacs. XEmacs is an old fork of Emacs. The X in its name is unrelated to X11.

Note: The Ubuntu LTS 12.04 and 14.04 repositories only have Emacs version 24.3 available. Version 25.1 or greater needs to be built from source. This might also be true for other linux distributions.

or in older versions of homebrew

This installs a pre-built package from https://emacsformacosx.com/

If you're not comfortable with the ways mentioned above, then EmacsWiki lists down a few ways to install Emacs for macOS.

Once Emacs is installed, run the following commands in the terminal to install the default Source Code Pro font:

or in older versions of homebrew

Notes: After completing the Spacemacs install process, then it's also recommended to add the osx layer to your dotfile. Installation instructions are available in the documentation for the osx layer.

Depending on the installed version of GnuTLS securely installing emacs packages may fail. In this case it is possible to install using emacs --insecure. However be aware that this means your packages will be transferred using http, use at your own risk.

You might also have some issues when doing some search on your projects, you probably want to install GNU grep through homebrew:

By default, all commands are installed with the prefix g. To use them with their normal names, you should add a gnubin directory to your PATH:

You'll also need gzip and put it in your path, to download it go to the GNUWin32 project page

By default Emacs looks for the .emacs.d directory in: C:\Users\<username>\AppData\Roaming

Notes: If you are behind a firewall or similar and you get an error regarding package downloads then you may try to disable the HTTPS protocol by starting Emacs with

but this should be a last resort because of the security implications.

You can set the dotspacemacs-elpa-https variable to nil in your dotfile ~/.spacemacs but this has the same security implications as the insecure flag. You may also want to clear out your .emacs.d/elpa directory before doing this, so that any corrupted packages you may have downloaded will be re-installed.

error: Package 'package-build-' is unavailable may occur due to heavy network taffic. You can fix it by setting the dotspacemacs-elpa-timeout variable to 70 in your dotfile.

Warning (bytecomp) and other compilation warnings are perfectly normal. If you're curious, you can find out why these occur here.

If the mode-line turns red then be sure to consult the FAQ.

There are currently, two supported, alternative locations, for a Spacemacs configuration.

This solution is ideal for quickly trying Spacemacs without compromising your existing configuration. Clone Spacemacs outside the Emacs dotdirectory ~/.emacs.d and modify the HOME environment variable.

Note: If you're using the Fish shell, then you'll need to modify the last command to: env HOME=$HOME/spacemacs emacs

For macOS users, you need to download the .icns version of the logo, then change the logo on the Dock.

When a new version is available then a little arrow appears in the mode-line.

Click on the arrow to update Spacemacs to the latest version.

Remove the < and > angle brackets when you're typing the lines below into your shell. And replace the text: "tag version which you are updating to" with a tagged version. This page lists the latest tags

Revert to a specific version

To revert to a specific version, just checkout the corresponding branch. For instance to revert to version 0.200, type the following command:

After updating Spacemacs (either manually or automatically), then you also should check if any updates are available for your packages. On the Spacemacs Home Buffer SPC b h, click (press RET) on the [Update Packages] button.

Spacemacs is a community-driven project, it needs you to keep it up to date and to propose great and useful configurations for all the things!

Before contributing be sure to consult the contribution guidelines and conventions.

Once you've learned the Spacemacs key bindings, you can use them in other IDEs/tools, thanks to the following projects:

The license is GPLv3 for all parts specific to Spacemacs, this includes:

For the packages shipped in this repository, you can refer to the files header.

The best way to support Spacemacs is to contribute to it either by reporting bugs, helping the community on the Gitter Chat or sending pull requests.

You can show your love for the project by getting cool Spacemacs t-shirts, mugs and more in the Spacemacs Shop.

If you want to show your support financially, then you can contribute to Bountysource, or buy a drink for the maintainer by clicking on the Paypal badge.

If you used spacemacs in a project, and you want to show that fact, you can use the spacemacs badge: