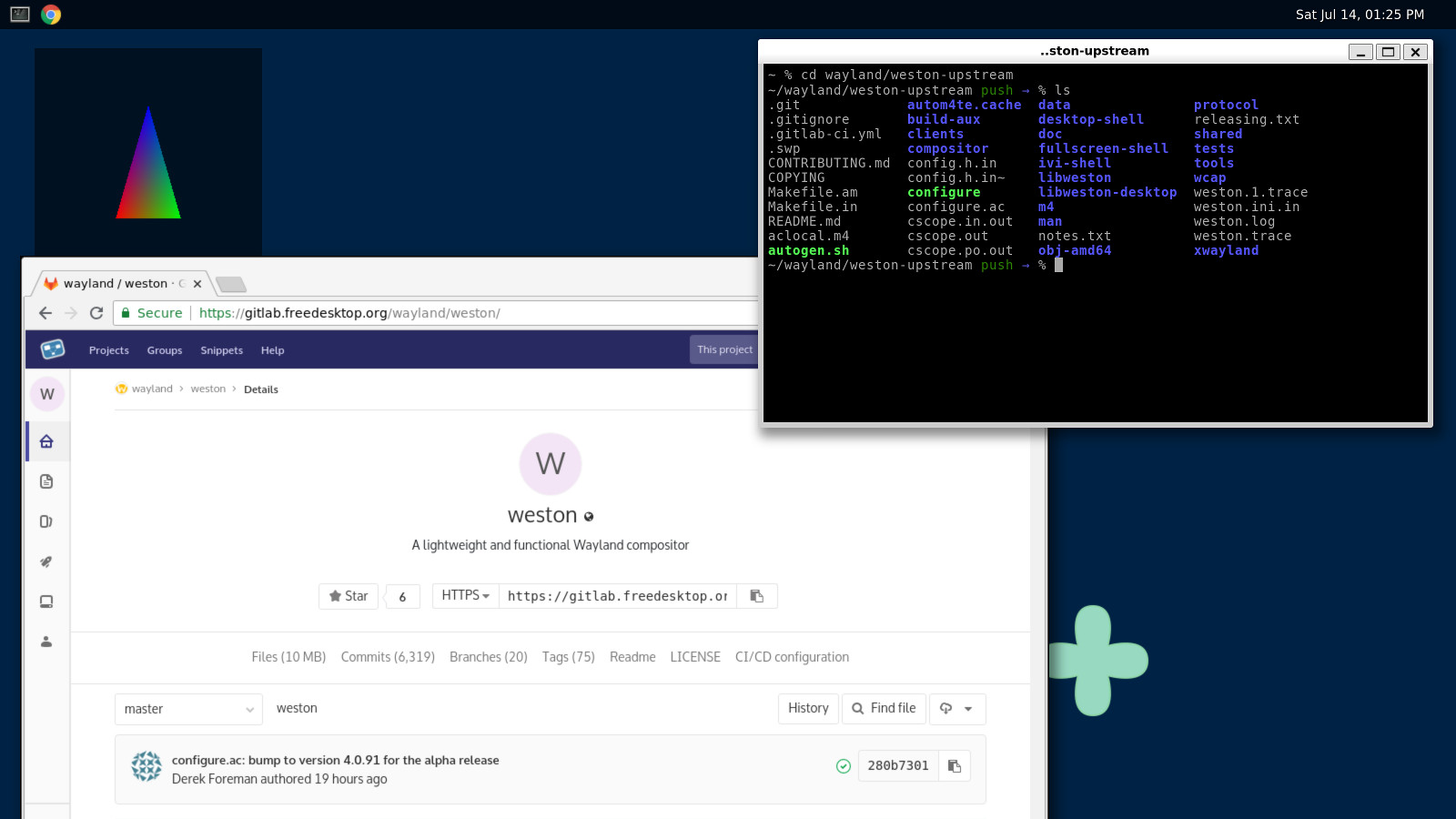 Weston is the reference implementation of a Wayland compositor, as well as a useful environment in and of itself.

The core focus of Weston is correctness and reliability. Weston aims to be lean and fast, but more importantly, to be predictable. Whilst Weston does have known bugs and shortcomings, we avoid unknown or variable behaviour as much as possible, including variable performance such as occasional spikes in frame display time.

A small suite of example or demo clients are also provided: though they can be useful in themselves, their main purpose is to be an example or test case for others building compositors or clients.

Weston's development is hosted on freedesktop.org GitLab. Please also see the contributing document, which details how to make code or non-technical contributions to Weston.

If necessary, the latest Meson can be installed as a user with:

Weston's Meson build does not do autodetection and it defaults to all features enabled, which means you likely hit missing dependencies on the first try. If a dependency is avoidable through a build option, the error message should tell you what option can be used to avoid it. You may need to disable several features if you want to avoid certain dependencies.

The meson command populates the build directory. This step can fail due to missing dependencies. Any build options you want can be added on that line, e.g. meson build/ --prefix=... -Ddemo-clients=false. All the build options can be found in the file meson_options.txt.

Every push to the Weston master repository and its forks is built using GitLab CI. Reading the configuration may provide a useful example of how to build and install Weston.

More detailed documentation on building Weston is available on the Wayland site. There are also more details on how to run and write tests.

For building the documentation see weston-doc.

Once Weston is installed, most users can simply run it by typing weston. This will launch Weston inside whatever environment you launch it from: when launched from a text console, it will take over that console. When launched from inside an existing Wayland or X11 session, it will start a 'nested' instance of Weston inside a window in that session.

Help is available by running weston --help, or man weston, which will list the available configuration options and display backends. It can also be configured through a file on disk; more information on this can be found through man weston.ini.

In some special cases, such as when running remotely or without logind's session control, Weston may not be able to run directly from a text console. In these situations, you can instead execute the weston-launch helper, which will gain privileged access to input and output devices by running as root, then granting access to the main Weston binary running as your user. Running Weston this way is not recommended unless necessary.

For documenting weston we use sphinx together with breathe that understands XMLs databases generated by doxygen. So far, this is a compromise until better tools are available in order to remove the doxygen dependency. You should be able to install both sphinx and breathe extension using pip3 command, or your package manager. Doxygen should be available using your distribution package manager.

Once those are set-up, run meson with -Ddoc=true option in order to enable building the documentation. Installation will place the documentation in the prefix's path under datadir (i.e., share/doc).

Improving/adding documentation can be done by modifying rST files under doc/sphinx/ directory or by modifying the source code using doxygen directives.

Libweston is an effort to separate the re-usable parts of Weston into a library. Libweston provides most of the boring and tedious bits of correctly implementing core Wayland protocols and interfacing with input and output systems, so that people who just want to write a new "Wayland window manager" (WM) or a small desktop environment (DE) can focus on the WM part.

Libweston was first introduced in Weston 1.12, and is expected to continue evolving through many Weston releases before it achieves a stable API and feature completeness.

Libweston's primary purpose is exporting an API for creating Wayland compositors. Libweston's secondary purpose is to export the weston_config API so that third party plugins and helper programs can read weston.ini if they want to. However, these two scopes are orthogonal and independent. At no point will the compositor functionality use or depend on the weston_config functionality.

As libweston's API surface is huge, it is impossible to get it right in one go. Therefore developers reserve the right to break the API/ABI and bump the major version to signify that. For git snapshots of the master branch, the API/ABI can break any time without warning.

Libweston major can be bumped only once during a development cycle. This should happen on the first patch that breaks the API or ABI. Further breaks before the next Weston major.0.0 release do not cause a bump. This means that libweston API and ABI are allowed to break also after an alpha release, up to the final release. However, breaks after alpha should be judged by the usual practices for allowing minor features, fixes only, or critical fixes only.

To make things tolerable for libweston users despite API/ABI breakages, different libweston major versions are designed to be perfectly parallel-installable. This way external projects can easily depend on a particular API/ABI-version. Thus they do not have to fight over which ABI-version is installed in a user's system. This allows a user to install many different compositors each requiring a different libweston ABI-version without tricks or conflicts.

Note, that versions of Weston itself will not be parallel-installable, only libweston is.

In order to provide consistent, easy to use versioning, libweston follows the rules in the Apache Portable Runtime Project http://apr.apache.org/versioning.html.

The document provides the full details, with the gist summed below:

Pkg-config files are named after libweston major, but carry the Weston version number. This means that Weston pre-release 2.1.91 may install libweston-3.pc for the future libweston 3.0.0, but the .pc file says the version is still 2.1.91. When a libweston user wants to depend on the fully stable API and ABI of a libweston major, he should use (e.g. for major 3):

Depending only on libweston-3 without a specific version number still allows pre-releases which might have different API or ABI.

Inspired by ATK, Qt and KDE programs/libraries, libjpeg-turbo, GDK, NetworkManager, js17, lz4 and many others, libweston uses a macro to restrict the API visible to the developer - REQUIRE_LIBWESTON_API_VERSION.

Note that different projects focus on different aspects - upper and/or lower version check, default to visible/hidden old/new symbols and so on.

libweston aims to guard all newly introduced API, in order to prevent subtle breaks that a simple recompile (against a newer version) might cause.

The macro is of the format 0x$MAJOR$MINOR and does not include PATCH version. As mentioned in the Versioning scheme section, the latter does not reflect any user visible API changes, thus should be not considered part of the API version.

All new symbols should be guarded by the macro like the example given below:

In order to use the said symbol, the one will have a similar code in their configure.ac:

If the user is not interested in forward compatibility, they can use 0xffff or similar high value. Yet doing so is not recommended.

The high-level goal of libweston is to decouple the compositor from the shell implementation (what used to be shell plugins).

Thus, instead of launching 'weston' with various arguments to choose the shell, one would launch the shell itself, e.g. 'weston-desktop', 'weston-ivi', 'orbital', etc. The main executable (the hosting program) will implement the shell, while libweston will be used for a fundamental compositor implementation.

Libweston is also intended for use by other project developers who want to create new "Wayland WMs".

There are still many more details to be decided.

The Weston project is (will be) intended to be split into several binary packages, each with its own dependencies. The maximal split would be roughly like this:

Weston's build may not sanely allow this yet, but this is the intention.