This action will force synchronization from 百度开源/baetyl, which will overwrite any changes that you have made since you forked the repository, and can not be recovered!!!

A complete Baetyl system consists of Master, Service, Volume and system resources used. The Master loads all modules according to the application configuration to start the corresponding services, and a service can start several instances, all of which are managed and supervised by Master. NOTE that the instances of the same service shares the storage volume bound to the service. Therefore, if an exclusive resource exists, such as listening to the same port, only one instance can be successfully started.

At present, Baetyl has the following official modules: 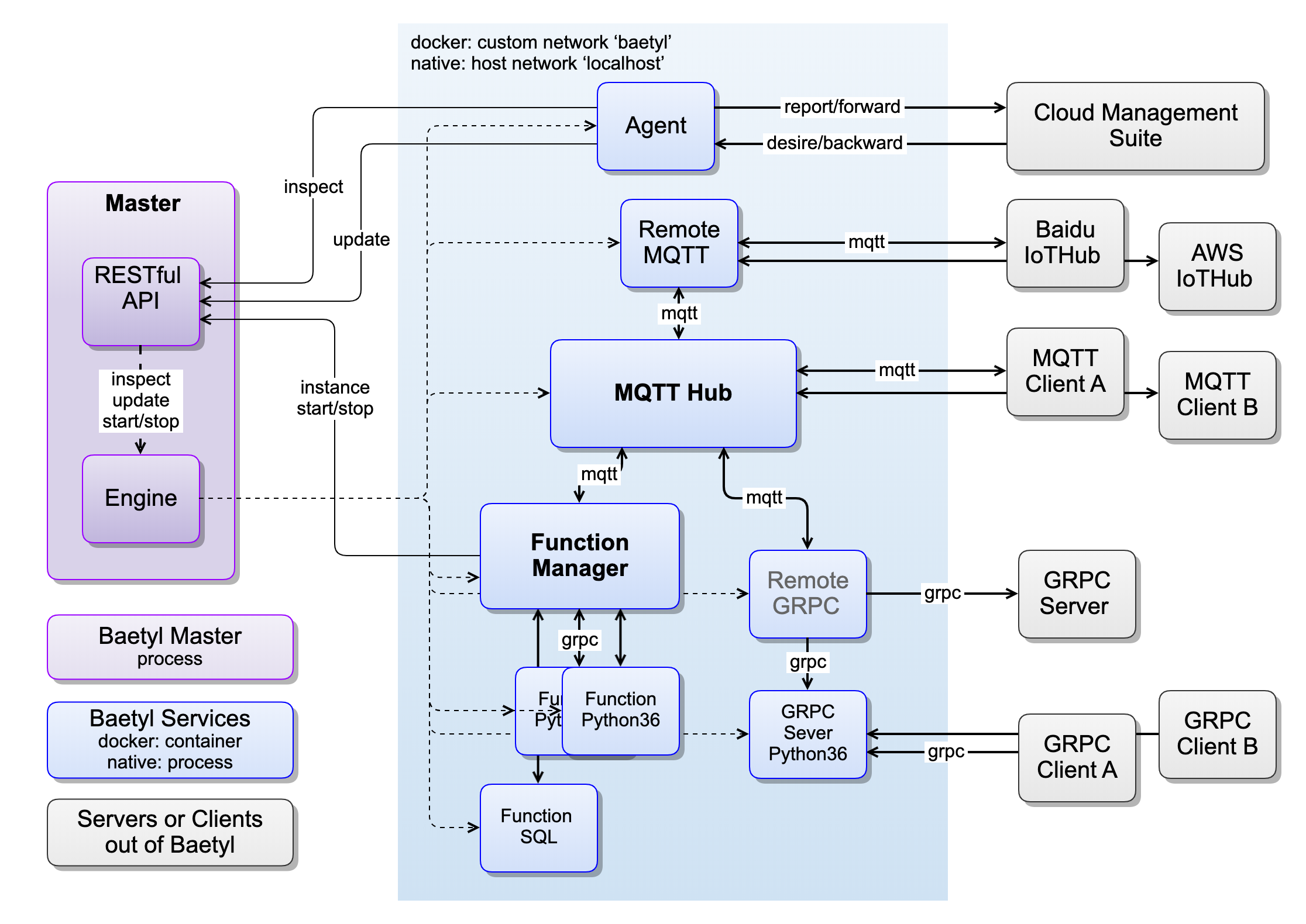 Master as the core of the Baetyl system, it manages all storage volumes and services, has a built-in runtime engine system, and provides RESTful APIs and command lines.

The start and stop process of the Master is as follows:

The complete application.yml configuration as follows:

Engine is responsible for the storage volume mapping of services, instance start and stop, daemon, etc.. It abstracts the service operation, can implement different service running modes. Depending on the capabilities of the device, different running modes can be selected to run the services. The docker container mode and the native process mode are currently supported, and the k3s container mode will be supported later.

On platforms that do not provide container services (such as older versions of Windows), the Native engine simulates the container's experience as much as possible. The engine interprets the service image as the package name. The package is provided by the storage volume and contains the program required by the service,but the dependencies of this program (such as Python interpreter, Node interpreter,lib, etc.) need to be installed on the host in advance. All services use the host network directly, all ports are exposed, and users need to be careful to avoid port conflicts. Each instance of the service corresponds to a process, and the engine is responsible for starting and stopping the process.

At present, the above two modes basically achieve unified configuration, leaving only the difference in service address configuration, so the configuration in example is divided into two directories, native and docker, but will eventually be unified.

The Baetyl Master exposes a set of RESTful APIs, adopts HTTP/1. By default, Unix Domain Socket is used on Linux systems, and the fixed address is /var/run/baetyl.sock. Other environments use TCP. The default address is tcp://127.0.0.1:50050. At present, the authentication mode of the interface adopts a simple dynamic token. When the Master starts the services, it will dynamically generate a Token for each service, and the service name and Token are transmitted to the service instance as environment variables which can be read by instance and sent to the Master in request header. It should be noted that the dynamically launched instance cannot obtain the Token, so the dynamic instance cannot dynamically start other instances.

For the service instance, after the instance is started, you can get the API Server address of the Baetyl Master, the name and Token of the service, and the name of the instance from the environment variable. For details, see Environment Variable.

The Header key is as follows:

The following are the currently available interfaces:

This interface is used to obtain the following information and status:

The process of application OTA is as follows:

This interface is used to periodically report the custom status information of the service instance to the Baetyl Master. The content of the report is placed in the body of the request, and JSON format is used. The first layer of the JSON field is used as the key and its value will be overwritten if it is reported multiple times. For example:

If the instance of the service infer reports the following information for the first time, including info and stats:

The subsequent JSON that baetyl-agent reports to the cloud is as follows:

If the instance of the service infer reports the following information for the second time, containing only stats, the old stats will be overwritten:

The subsequent JSON that baetyl-agent reports to the cloud is as follows, the old info is kept and the old stats is overwritten:

Currently, several modules are officially provided to meet some common application scenarios. Of course, developers can also develop their own modules.

The baetyl-agent, also known as the cloud agent module, is responsible for communicating with the BIE Cloud Management Suite. It has MQTT and HTTPS channels. MQTT enforces two-way authentication for SSL/TLS certificates. HTTPS enforces one-way authentication for SSL/TLS certificates. Developers can refer to this module to implement their own Agent module to connect their own cloud platform.

The cloud agent do three things at the moment:

After receiving the application OTA command from the BIE Cloud Management Suite, the cloud agent first downloads the storage volume data packets used in all configurations and decompresses them to the specified location. If the storage volume data packets already exist and the MD5 is the same, the download will be skipped. After all storage volumes are ready, the cloud agent module will call the Master's /update/system interface to trigger the Master to update the system.

_NOTE: If the device cannot connect to the external network or needs to leave the cloud management suite, you can remove the Agent module from the application configuration and run offline. _

The baetyl-hub is a stand-alone version of the message subscription and distribution center that uses the MQTT3.1.1 protocol to provide reliable messaging services in low-bandwidth, unreliable networks. It acts as a messaging middleware for the Baetyl system, providing message-driven interconnect capabilities for all services.

The Hub supports simple topic routing, such as subscribing to a message with the topic t and publishing it back with a new topic t/topic.

If this module does not meet your requirements, you can also use a third-party MQTT Broker/Server to replace it.

The baetyl-function-manager, also known as the function manager module, provides the computing power based on the MQTT message mechanism, flexible, highly available, scalable, and responsive, and compatible Baidu CFC. It is important to note that function service do not guarantee message order, unless only one function instance is started.

The function manager module is responsible for managing all function instances and message routing rules, and supports automatic scaling. The structure diagram is as follows: 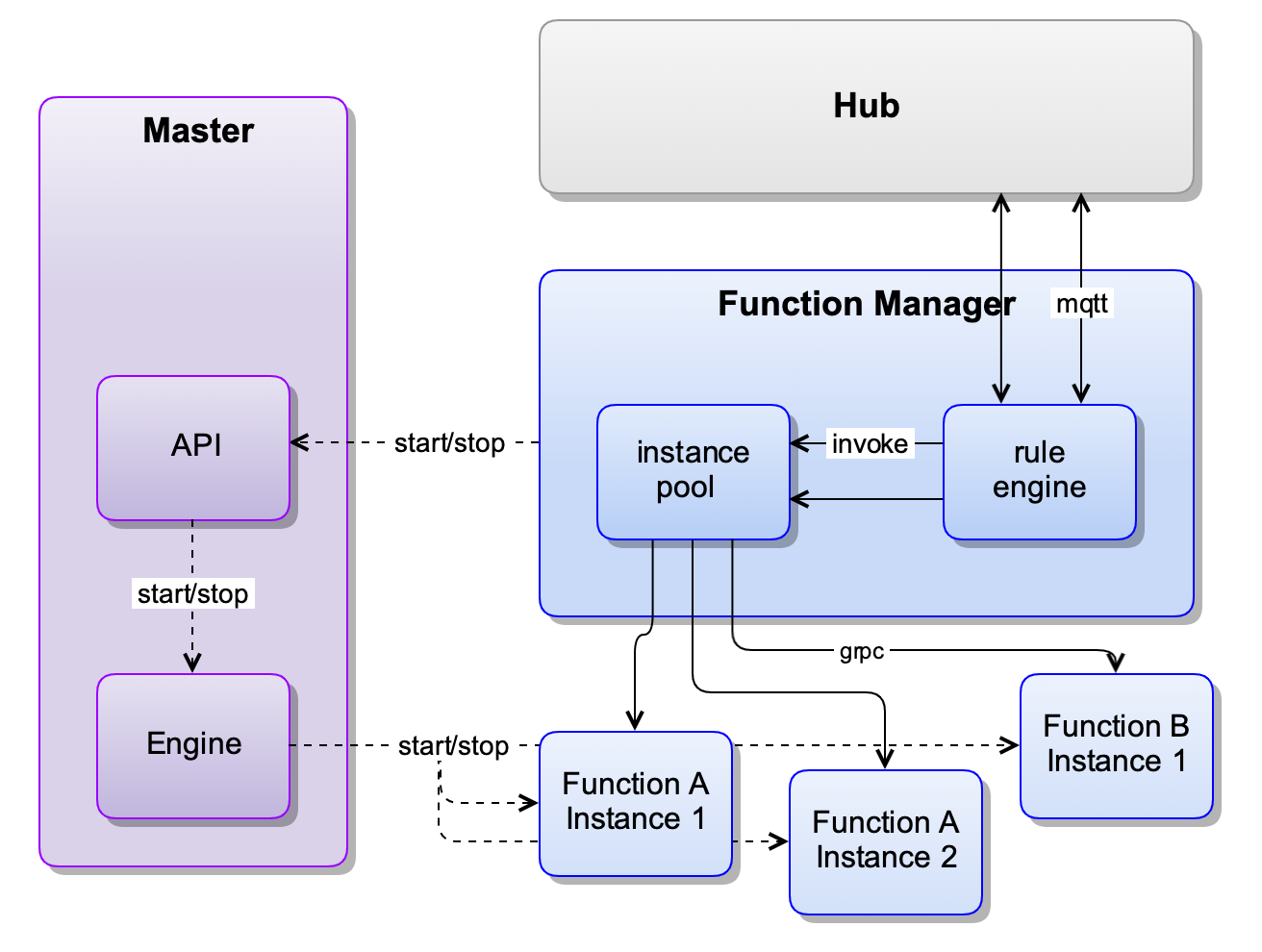 baetyl-function-python36 provides Python functions similar to Baidu CFC, where users can handle messages by writing their own functions. It is very flexible to use for filtering, converting and forwarding messages. This module can be started separately as a GRPC service or as a function instance provider for the function manager module.

The input and output of a Python function can be either JSON or binary. The message Payload will try a JSON decoding (json.loads(payload)) before passing it as a parameter. If it succeeds, it will pass the dictionary type. If it fails, it will pass the original binary data.

An example is shown below:

_NOTE: In the native process mode, to run sayhi.py provided in the example of this project, you need to install Python3.6 and its packages pyyaml, protobuf3 and grpcio (pip installation can be used, **pip3** install pyyaml protobuf grpcio). _

NOTE: In the native process mode, to run index.js provided in the example of this project, you need to install Node8.5.

As shown in the figure above, the Baetyl remote communication module is used to forward and synchronize messages between the Baetyl Local Hub Module and the remote cloud Hub. Further, the edge-cloud collaborative message forwarding and delivery can be realized by accessing the MQTT Client at both ends.

Report success
We will send you the feedback within 2 working days through the letter!
Please fill in the reason for the report carefully. Provide as detailed a description as possible.
Please select a report type
Cancel
Send
2019年8月29日，百度智能云物举办了一年一度的云智峰会 spread retract
https://www.oschina.net/p/baetyl
Python
Apache-2.0
Use Apache-2.0
Cancel
No release
load more
can not load any more
Python
1
https://gitee.com/steven.mo/BAETYL.git
git@gitee.com:steven.mo/BAETYL.git
steven.mo
BAETYL
BAETYL
master
Going to Help Center